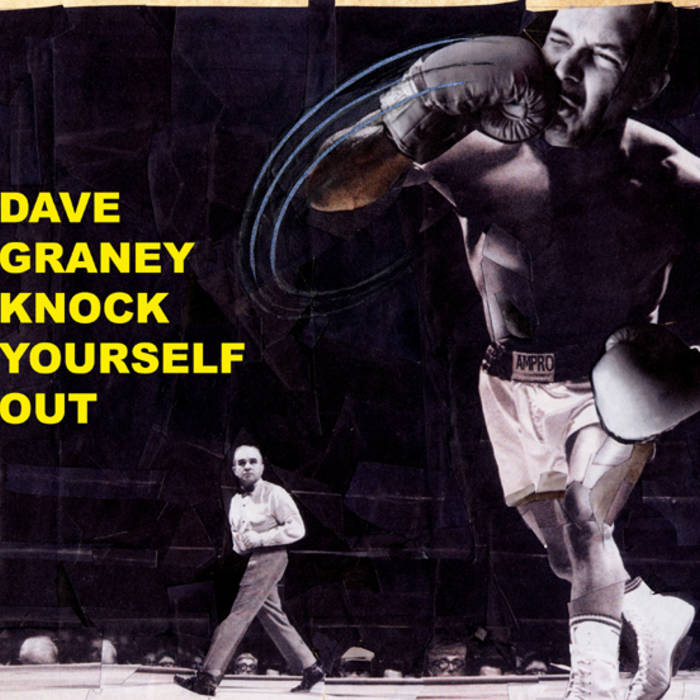 “Knock yourself out” is the new album from Dave Graney. its a solo album though longtime collaborator Clare Moore was very much involved in the recording , writing and arranging of many tracks. It follows the jazz r”n”b masterwork of 2008 “we wuz curious” which was credited to their collective “The Lurid Yellow Mist”.
The title is another boxing allusion . ( “we wuz robbed!” - “Knock yourself out!”) In Dave Graneys way of speaking, its an invitiation to “go your hardest!” Its a positive lick. “Knock yourself out”.C’mon!
Its not a guy with an acoustic guitar and its a very feisty and upbeat set. Dave wants it to be called an “electro boogie” album as it has a kind of keyboard driven wonk sound in some parts.
Dave Graney’s music is not generic. Its not rootsy or pop but it kind of is as well.
Its Dave Graney music. He started to write songs in the post punk period when mythology and ideology and self expression and mythology were all screwed up and meeting head on. Everybody wrote songs about their own situation then, standing outside the disco, about to walk in.
Hes always up to something but American music has always been an inspiration and his own drama as an Australian artist and musician has thrilled him as well.
So here he is again, album number twenty something, standing outside the disco, about to walk in, “Knock yourself out!”

I call this record a filthy r’n’b set or an electro boogie album. Its a solo album but its not a guy with an acoustic guitar. I play most of the instruments except for the drums which Clare Moore takes care of, either her trusty vintage Gretsch kit which she has had since the Moodists days or she took the sounds from her keyboard and arranged them as she saw fit. I wrote all the lyrics and music except for three which Clare either set up for me or worked on with me. Stu Thomas plays amazing bass on two songs and sings on others and Stu Perera plays lead guitar licks on three. I play electric guitar, bass and keys on all the others. I recorded and mixed it at our studio, the Ponderosa.

The title track , “knock yourself out” , started when Plutonic asked me to drop a cameo on his last album. I dropped the whole lyric for him. It didn’t fit his idea so he left it with me. While I was away on a rare solo tour Clare set it to this rhythm track. Voila!
Like a lot of the songs it has some lyrical blues licks which I took in early in my life and they stayed with me. I keep saying “ as a concept- incredible! But I’m a reality!” Its something I remember Morris Day from the Time ( Princes rival in Purple Rain”) saying to an interviewer once. It stuck with me....
“It was then or never” is a groove that came out of nowhere. Its a retrospective kind of song. From high up in the air. We had the track going already and then Stu Thomas really lifted it with his amazing bass line and sound.
“honky tonk rope a dope” is , like the title track, another boxing allusion. Muhammad Ali played the “rope a dope” on George Foreman in Zaire in 1974. He fell back on the ropes and allowed George to punch him for ten rounds. Eventually George punched himself out. i mean he had no more punches to throw. Ali then turned on him. Its a “Honky Tonk rope a dope” when I’m playing in the clubs is what I’m asserting.
“Bodysnatcher Blues” is a one note boogie I’ve been working on for a few years. The note is E7. I always liked those fifties sci fi flicks with their commie pinko terror undertones.
Clare Moore cooked the music up for “Dylan the indie fake” while I was away on a rare solo tour. I fit the words to it in one take. I use a vocoder on my vocals and an octaver and a fuzz on my guitar. I like fakes. Real things are often overrated. More fake in a way too. In the music field anyway. LIke I say in the song, I like the fakes. My favourite parts of this song are musical.

“I need my guitar” is me on guitar, keys and bass and Care on drums. Stu Perera does the spindly lead notes. Its one of my songs for the players. Its the most recent song and I wrote it in a time of great anguish.

“Sellout!” is another track that Clare Moore cooked up for me. She started from an acoustic guitar groove I’d laid down. Stu Thomas dropped in that amazing propulsive bass.
“Throwin one into the world” is basically that filthy r’n’b I was talkin’ about. I play the bass and the rhythm guitar and the organ and Stu Perera plays all the great r’n’b licks. Clare Moore played and edited the drums and percussion. The song ends with me throwin out more of those old lyrical blues licks, Little red roosters and growin so ugly and shootin lions etc. Its a song about being a man.
“So easy” is a countrypolitan kind of groove.I tried to make the vocal sound like a movie voice over. In general , I mix teh voice up high so tehres no lyric sheet on teh album. Ifigure if you need one of them the voice sn't loud enough.
“I dont wanna go bush” is more atonal country blues with latin discords pushing it along the very edges of a tune.I was rememberinga visit to teh country when i was a kid.
“Oakleigh Bowie Blues” is just that. the Oakleigh Bowies” were a gang of sharpies I think I heard about sometime. Maybe I dreamt it? The song concerns a tough guy down on his very last bit of luck.
“2068 babe” is an expanded version of a song of mine put out by a UK label in 2008. It needed more guitars and organ and vocals and a drum beat so i added them all. I play everything. Its almost eight minutes long and is a rumination along a certain period of time. It was “68” before, a time of great power shifts and conflict that I liked the ring of , so I have launched it into the future , “2068 babe”.